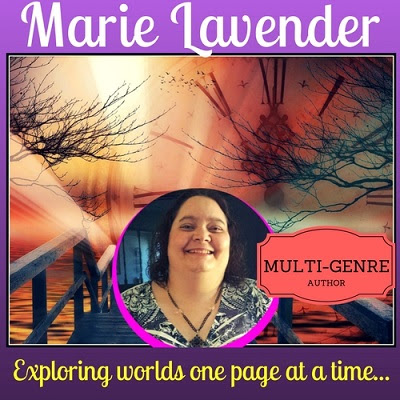 AUTHOR BIO
Multi-genre author of Victorian maritime romance/family saga, Heiresses in Love, and 18 other books. Marie Lavender lives in the Midwest with her family and two cats. She has been writing for a little over twenty-five years. She has more works in progress than she can count on two hands. Since 2010, Marie has published 21 books in the genres of historical romance, contemporary romance, romantic suspense, paranormal romance, romantic comedy, dramatic fiction, fantasy, science fiction, mystery/thriller, literary fiction and poetry. An avid blogger on the side, she writes adult fiction, as well as occasional stories for children, and has recently started some young adult fiction. She also contributed to several anthologies. Though Marie has standalone titles on the market, her current published series are The Eternal Hearts Series, The Magick Series, The Code of Endhivar Series, The Misfits Series and The Blood at First Sight Series, but she has many others planned. Her Victorian maritime romance series is returning, and the second editions of the trilogy will be released soon under her new publisher, Foundations Books. Discover more about her and her work at the following links.

Follow her on BookBub for new release updates: Marie Lavender on Bookbub 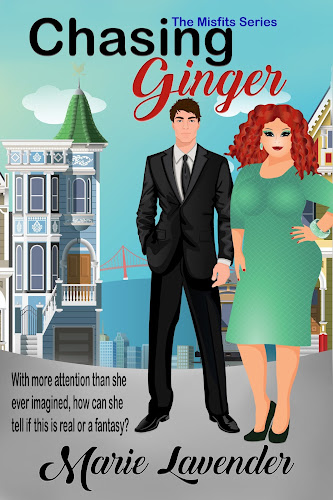 Tagline: With more attention than she ever imagined, how can she tell if this is real or a fantasy?

Blurb:
Chased by a group of angry men. Saved by quite a hunk.


This is not the résumé Ginger Halloway ever imagined having. But thanks to a miracle pill, which
makes her size 22 body instantly sexy, that’s what happened.

Yet, now Lance Franklin is showing interest in her, and she can’t figure out if he really likes her for
her, or if it’s just because of a bizarre drug.

And her wild bunch of friends, The Misfits…well, they’re always getting her into some interesting
situations.

So, yep, business as usual. Except for the guy. What the hell should she do about him?

As for Lance, he believes he’s lucky to have found Ginger. But can he convince her they should go
for it?

With some new attention from the hottest guy she’s ever met, Ginger can’t help but wonder…is this
all too good to be true?

(CONTENT WARNING: Watch for foul language, steamy scenes, and a pesky yet messy ability to
choke on your dinner while laughing. If you’ve come expecting just a lighthearted, slapstick romance,
you may not get that here. The author approaches sensitive topics in the best way she knows how. Just
be prepared for all the feels to be deeper than usual for this genre – an emotional romantic comedy. No
unruly cliffhangers, HEA guaranteed.) 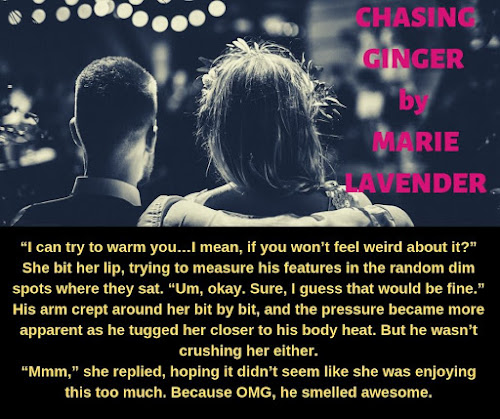 She grimaced, and then said, “Honey, that man has been looking at you for a while. Do you know him?”

It took a moment for Ginger to realize Sharon referred to her specifically. “Huh? What man?”

Sharon made a discreet gesture.

She turned and froze. They’d left the red satin alcove curtain open, and from this vantage point her friend was right. A man – a very handsome one, in fact – was staring at her from his position at the long bar. He had dark hair and smoky blue eyes. He lifted his hand in a wave. Recognition came to her after a couple seconds.

It was him, the one who’d rescued her from that mob a few days ago. Right…Lance was his name.

How had he known she’d even be here? Heat moved across her cheekbones.

“Ginger, do you know him?” her friend repeated. “I’m not kidding. He’s really checking you out.”

She nodded. “A little, I guess.” She tried to avoid the man’s gaze while she got her rapid breaths under control.

“Introduce us!” Nicole chimed in with a smile.

Then she thought about the pills she’d taken. InstaSin was supposed to attract the opposite sex. Damnit, had he been following her? Panic set in and she felt weak with it. She wouldn’t want to be chased again. Maybe she should just stop the pills. It was more trouble than she’d anticipated, for sure. But her doc friend Laura had said the chemical makeup she’d had the lab analyze should be all right. It didn’t seem like an unhealthy cocktail.

“What’s wrong, honey?” Jessica reached out and touched her arm.

“Ah…” God, she must’ve lost her mind after all. She couldn’t assume this was about the drug. Maybe he was just being sociable. Surely InstaSin wouldn’t affect every man around her? Of course not. That was crazy town.

Ginger shook off her apprehension and glanced back at him. Sharon was right. He still watched her. She returned his earlier wave, pasted a smile on her lips, and beckoned him with a flick of her fingers. She noticed the surprised look on his face.

At once, he set his drink aside and crossed the room to their alcove. When he approached, he offered a nod to her group.

His deep baritone sent shivers down her spine. Still, somehow her body warmed too; his voice a caress over her skin.

The girls chimed in, apparently in agreement.

He turned to Ginger. “I thought I’d never see you again.”

“I know what you mean,” she murmured. “I have to thank you once more for your rescue the other night.”

“Of course. I couldn’t deny a lady in need.”

A few girls snickered and she glared at them. Her friends tended to have somewhat bawdy humor when it came to sex, and she didn’t need them embarrassing her in front of this hottie. Turning to the man, she said, “Lance, these are my good friends. The one with the wild hair is Nicole. Then there’s Sharon, Merry, Jessica and Valerie,” she pointed out each one by turns. “Ladies, this is Lance…oh, I’m sorry. I never got your last name.”

“It’s my fault for not giving it before. Franklin. Lance Franklin.”

She almost giggled, since he introduced himself like James Bond. She caught the laugh in time, however. As the girls greeted

him in turn, she couldn’t take her eyes off his perfect features.

Da-yum, his chest was huge. Those muscles went on forever, and she wanted to find out what was beneath the crisply pressed sky-blue shirt which looked perfect against his smoky eyes. He was tall too. She knew from memory he all but dwarfed her 5’4” frame.

“A pleasure to meet all of you.” Then he looked at Ginger again. “I didn’t know you’d be here.”

“I don’t exactly advertise it,” she replied in a dry tone.

He frowned. “May I please have your name now? I know you were vague before, to protect yourself. But I’m not like the people you ran away from.”

His smile was slow and thorough, warmed her again in all the right places. She shifted to ease the sudden ache between her thighs.

“A perfect name for a lovely woman.”

Her breath caught, and her body remembered how it had felt to get close to him. She’d never been called ‘lovely’ in her life. Was this a result of the drug or just politeness?

“Ah, thank you,” she stammered, appalled to know she’d lost her composure. If she wasn’t careful, she’d ooze like a puddle on the floor. And was he in fact watching her with such intensity? She couldn’t pinpoint what it was. He looked…enthralled. But it could not be the case. Men like him certainly didn’t stare at her in such a manner. And that wasn’t just due to a certain individual’s CEO status. 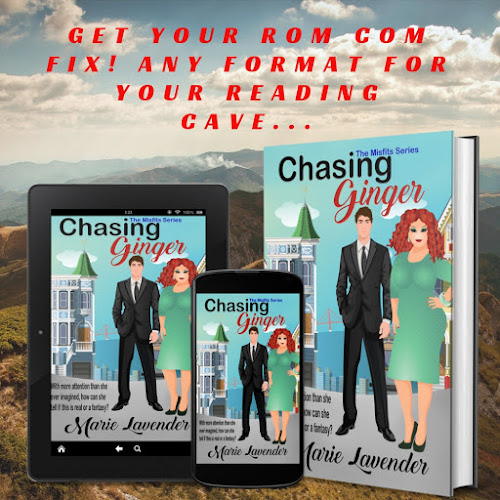