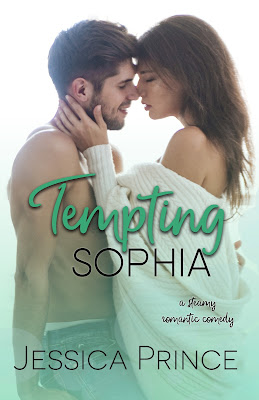 Having my heart broken once was enough to make me give up on the idea of love all together. Instead of searching for The One I decided to embrace variety and turn my back on monogamy. I made a living convincing women they didn’t need a man to feel complete.
And I totally rocked at it.
Until the man who shattered my happily ever after came waltzing back into my life, determined to make me fall for him all over again.
He claims that I’m the love of his life. He wants a second chance, and it seems like he’ll stop at nothing to tempt the hell out of me. But if Dominic Abbatelli thinks he can win me back with his puppy dog eyes, heartfelt apologies, and declarations of love then he’s…probably right 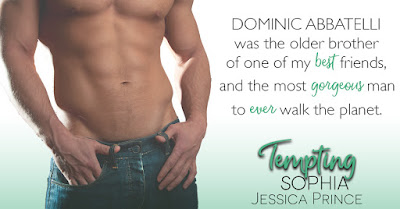 This book is part of a series of friends finding love, as only can be done by Jessica Prince - with whit, hilarity and drama ... SO MUCH DRAMA! And I enjoyed EVERY minute of it.  She has once again proved her own brand of unique writing.  The characters are amazing, solid, and show not only strong personalities but their vulnerability.  It's almost as if they are true to life and an old friend.

This story deals with a second chance at romance - about righting a wrong done to another due to miscommunication.  Sophia and Dominic are sweethearts from long ago - she's the best friend of his sister who he never noticed until much later.  After being together for four years, they had a huge fight and due to miscommunication, they haven't really spoken to each other for 10 years.

It was hard to pick a side in this debate - Dominic was in the wrong, but so was Sophia - however, this wasn't about what side was right/wrong.  It was more about "Can you acknowledge your mistakes, learn from them, and attempt to start over again".

You could clearly see the mistakes made on both sides - through flashbacks of their relationship - and you start to see/understand where they both went went wrong.  But what never left either one of them was the deep love they shared.  But now the question is - "Is love enough to start over again"?

I enjoyed this story more than Seducing Lola - which was hysterical and LOL fun.  And while this book was funny, sexy and sweet - the angst of the the past is what solidified in my heart.  I wanted more angst.

I can't wait to read the final story in this trilogy of girlfriends (Daphne's story sounds like it will break my sanity!) and can only hope that we get more snipets into Dominic & Sophia's future as we did with Lola and Grayson in this. 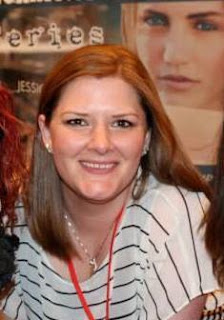 Born and raised around Houston Texas, Jessica spent most of her life complaining about the heat, humidity, and all around pain in the ass weather. It was only as an adult that she quickly realized the cost of living in Houston made up for not being able to breathe when she stepped outside. That’s why God created central air, after all.
Jessica is the mother of a perfect little boy–she refuses to accept that he inherited her attitude and sarcastic nature no matter what her husband says.
In addition to being a wife and mom, she’s also a wino, a coffee addict, and an avid lover of all types of books–romances still being her all time favs. Her husband likes to claim that reading is her obsession but she just says it’s a passion…there’s a difference. Not that she’d expect a boy to understand.
Jessica has been writing since she was a little girl, but thankfully grew out of drawing her own pictures for her stories before ever publishing her first book. Because an artist she is not.
Facebook | Website | Twitter | Pinterest | Instagram | Amazon | Goodreads
Sign up for Jessica’s Newsletter