Give Me Books Promotions Hosted Release Blitz for REWRITE by Stephanie Rose! 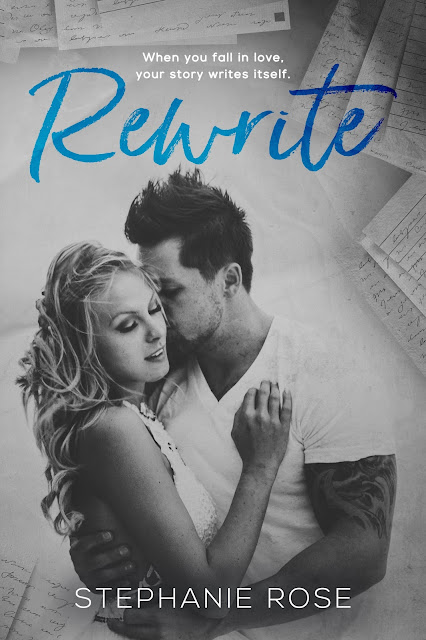 Once upon a time, a girl loved a boy and he loved her back. They lived happily ever after.

But our story was never that simple.

I loved Josh with all I had, right until the day he left. Now, all these years later, he was back—and wanting me the way I’d always longed for him. Except now, I belonged to someone else. Someone who never left me the way Josh had. I figured
that was the end of our story. I couldn’t alter the past.

I didn’t want to rewrite my future.

Brianna was always more than my best friend. She was the shining light in my black hole of an existence, and I loved her with every cell and bone in my body. I wasn’t good enough for her, though—more the villain than the hero in our fairy tale.

When I had to leave, I vowed to come back a better man—for her. But when I finally did return, she wasn’t waiting for me anymore. She had someone new, her very own Prince Charming. Did that mean our story was over? I couldn't change our past.

It was time to rewrite our ending. 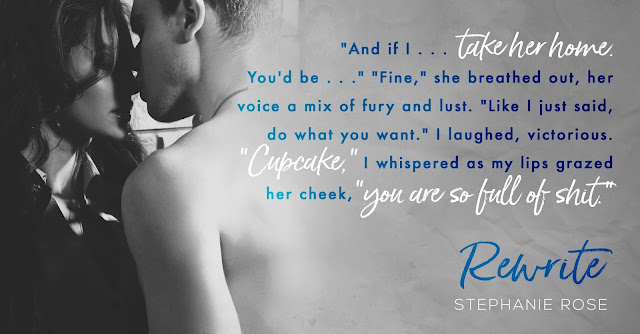 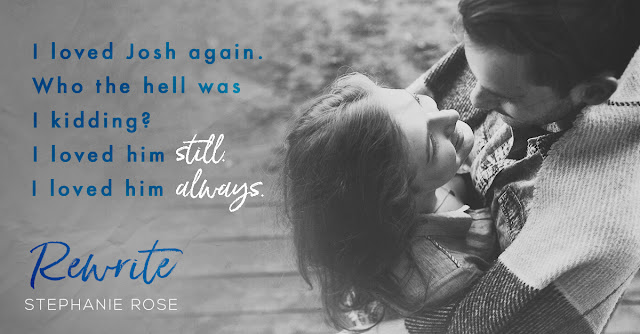 “This place is amazing, Josh.”
My chest swelled with pride as Brianna’s widened eyes darted around the shop. Maybe it wasn’t really my place, but Uncle Billy trusted me enough to run it on my own. I hired the employees, handled the books, and met with customers. He depended on me instead of waiting for me to fuck up. The local troublemaker came back and made good, but that wasn’t such an easy sell for everyone. Good thing I didn’t give a shit about everyone. The only opinion that ever mattered stood in front of me, beaming with pride.
My mouth split in a wide grin. “Thanks. It’s getting there. Hoping things pick up a little after the holidays. No one wants a new bike when there’s an inch of ice on the ground.” I laughed until Brianna’s face fell.
“Can I ask you something?” She slid into the chair in my office as her lips pursed.
“Of course.” I leaned my hip against the edge of my desk and crossed my arms.
“What’s up, Cupcake?”
“Did . . . did you really have a new client in Manhattan last week, when you drove me to
work?”
I took in a deep breath and exhaled slowly. “Why would you ask that?”
“Scott and I—”
She shook her head and waved her hand. “It’s nothing. Don’t mind me.”
“No.” I nudged her ankle with my foot. “Let me guess. Scott isn’t too happy about me hanging around so much.” I raised an eyebrow.
Brianna reluctantly nodded. “It’s a guy thing, I guess.” She chuckled to herself. “They get territorial if someone else tries to play with their toys.” She laughed until she realized what she said and then covered her mouth with her eyes huge.
She was so fucking cute I couldn’t stand it. “I didn’t mean play, I meant . . .” She dropped her head into her hands, and I couldn’t hold in a laugh anymore.
“C’mon,
Bri. I’m dying to know.” I peeled her fingers away from her face and crouched in front of her. “What did you mean? Scott thinks I want to play with you? Don’t tell him about the GI Joe and Barbie castle we made when we were kids. He’ll flip the fuck out.”
Her cheeks flushed as she nudged my shoulder.
I caught her hand and held it in both of mine. As our gazes locked, laughter stopped.
There was no way in hell what I was feeling was only one-sided. I doubted it ever was.
We didn’t talk about it, but I remembered every moment of that night at my apartment.
Brianna rushing over to take care of me, the tortured look on her face when I asked her to get into bed with me. It wasn’t my finest hour, but I needed her.
My soul cried out for her that night and she came, like she always did. She may have ignored my wimpy confession, but when she said she loved me, I knew she didn’t mean as only her best friend.
“Josh,”
Brianna pleaded on a whisper. “Don’t, please.”
“Don’t please what, Bri?” Feeling brazen, I tucked a piece of hair behind her ear and cupped her cheek. I ran my thumb along the delicate curve of her jaw. Her eyes fluttered, urging me on. “Don’t touch you?” I let my finger drift over her full bottom lip. “Don’t kiss you?” I whispered with a husky rasp. Our faces were so close, our lips brushed. Brianna’s mouth parted, and I uttered a curse under my breath. We were so damn close. All we had to do was close that distance. Her hand drifted up my shoulder and clutched the back of my neck.
“Josh,”
Brianna sighed as she rested her forehead against mine. “We . . . We can’t.”
Her hand drifted down my jaw. Her hooded eyes and flushed cheeks disagreed with the words sputtering from her mouth. I caught her hand and pressed a soft kiss to her palm. It trembled as she took in a quick gasp.
“Yes, we can, Bri,” I whispered as I leaned in. “You’re so damn beautiful.” Shit, I almost tasted her. She stilled as I cupped her neck and inched closer. 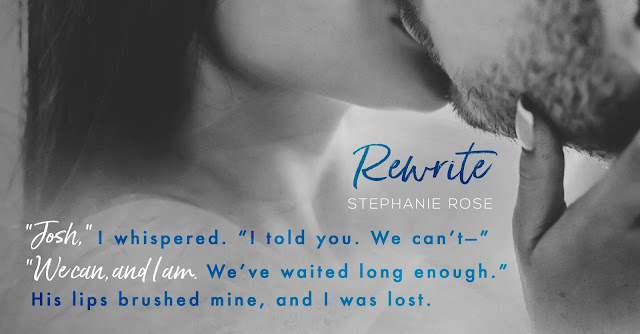 Every time I read a second chance at love, it's rarely done right or well - but this one was hit outta the park! Josh and Brianna’s story hit me right in the feels ... and my heart has yet to recover. Their story just resonated with me - it felt like I was listening to a story being told from an old friends perspective - that's how real it felt. From the very beginning until the unexpected end - I was begging for more - I didn't want their story to be over. Stephanie - my fellow Bronx Girl ... this is your masterpiece.

Best friends since childhood, Josh and Brianna have skirted around their feeling for one another. Neither expressed their desire to take their relationship from platonic to romantic and each suffered the weight of that decision. As all things happen, time moved on, and feelings - while never acknowledge or reciprocated - were buried. New relationships formed, but they held onto what little they had of each of other and their friendship.

Then Josh makes a decision that will forever alter his life and leave Brianna behind - for 10 years! It's the ultimate test to their friendship. And when he returns, not only has Josh changed, but so has Brianna - in ways neither one anticipated. But long buried feelings can't stay hidden forever. And neither can feelings of hurt and abandonment. Will Josh & Brianna work their way back to each other? Will old resentments fade? Will their hearts ever draw them out of the "friend" zone into something more?

I loved the dynamic of Josh & Brianna's relationship - from their humble beginnings in grade school. When I read about the taunts from fellow classmates towards Brianna, I was struck back in time to my own childhood, wishing I had someone like Josh to help battle the little piss-ant demons who made life so torturous back then for me - I needed someone like Josh who not only stand up for me, but look into my soul and find a kindred spirit.

Ms. Rose did an absolute impeccable job of creating the angst, as well as backstory. Josh and Brianna’s story wasn’t always smooth sailing - and in fact my heart dropped at one specific time that I absolutely did not see coming. I was totally blindsided and questioned why the author would do that. However, nothing in life is handed to you on a silver platter. The incident in question - I won't say what happened or where - was handled with authenticity and true to life. And in the end, Josh & Brianna love story was made all the more real for it.

What else can say about Rewrite? This book is an example of why when I hear that Stephanie is working a on new story, I immediately ask "Let me know when the sign up is happening, cause I'm so there!"

I look forward to the next release. 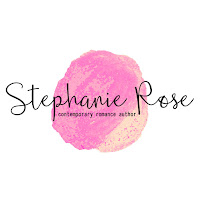 Stephanie Rose grew up loving words and making up stories. Being able to share them with readers is her dream come true. This lifelong Bronx girl loves Starbucks, wine and 80s rock. Her voice often gets mistaken for a Mob Wives trailer.

She married her prom date and has a seven-year-old LEGO obsessed son. She believes there is nothing sexier than a good guy who loves with all his heart, and has made it her mission to bring as many as she can to the page. 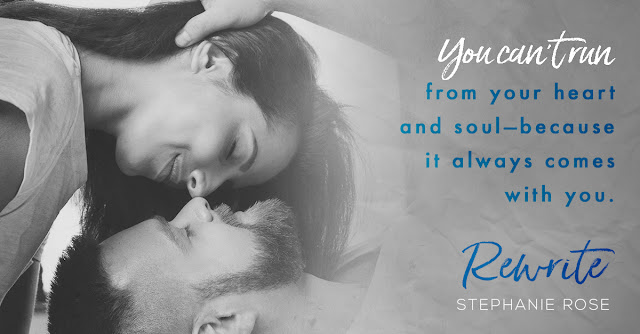