IndieSage PR Hosted Release Blitz for ON A TUESDAY by Whitney G.!

Charlotte Taylor has three automatic strikes in my book: 1) She hates me. She also claims that I’m a “domineering jerk with a huge, overbearing ego.” (I do have something huge. It’s not my ego, though.) 2) She takes our mandatory tutoring sessions way too seriously. 3) She’s sexy as hell…And a virgin.

At least, those were her strikes before our study sessions started lasting longer than they were supposed to. Until one innocent kiss became a hundred dirty ones, and until she became the first woman I ever fell hard for.

Our future together after graduation was supposed to be set:
Professional football for me. Law school for her.

But she left me at the end of the semester with no explanation, and then she completely disappeared from my life.

**This is a full length second chance romance, inspired by Adele’s “When We Were Young”** 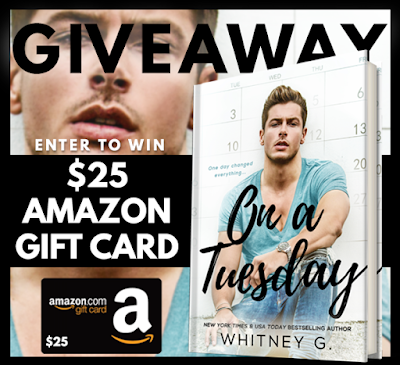