From the author of Saving a Legend (“A deep and moving story about family, acceptance, and love.”—Katy Evans) comes another smoldering MMA romance featuring the Kavanagh brothers, the chiseled alpha males whose real legacy is love.
Kane Kavanagh has always had one goal: being the best mixed martial arts fighter alive. With the MMA National Championships in Las Vegas fast approaching, the man they call “Killer” has no intention of letting anyone or anything get in his way. Somehow, though, a feisty opponent has slipped beneath his guard—and stolen his heart. Fiery and passionate, Nora Hannigan is harder to pin down than any rival Kane has faced in the ring. And she isn’t afraid to tell Kane that she wants nothing to do with him.

With her best friend about to marry into the Kavanagh family, Nora has been resisting Kane’s shameless attempts at flirting for months. But after their undeniable chemistry finally takes over, leading to the hottest night of Nora’s life, she’s running scared. There’s a lot about her life Kane doesn’t know, and she won’t be responsible for ending his career. Now Kane’s out to prove that he’s ready for a commitment by winning her heart—and he’s never lost a fight.

BECOMING A LEGEND by Sarah Robinson: 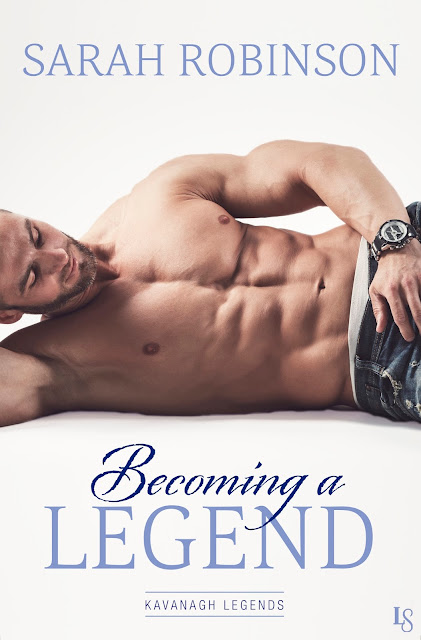 ***Received this book from NetGalley in exchange for an honest review***

I enjoyed the hell outta this book! I even enjoyed the sexual tension that ran rampant between Nora and Kane. Since the last book, I've been rooting for these two to get together. The sparks were there from the very beginning and the more time progressed, the more these two became engrained in each other's lives. There was NO way these two could not act on it!

The only problem I had (my main bane of frustration) from the beginning to end had to do with both Nora & Kane's ignoring their true feelings for one other and hiding them. I couldn't understand Kane's reasoning, but I understood Nora's. However, there were times when I wanted to slap them/knock their skulls together for not paying attention to the signs. I mean seriously - How could they ignore that chemistry?

The character I absolutely couldn't relate to was Marie. She was just more than an absent-minded parent, she was a moocher and worse, towards her only child? I loathed that woman and I hope to never hear of her in the future. Nora's desperate fight for Marie's love broke my heart, thus her reasoning for being leery of people ... and of Kane. Marie doesn't deserve Nora's attention/devotion or her love ... EVER. There is no justification at all for a child to be used in such a callous way by their own parent.

The character I truly fell in with this time around was Seamus. He tugged at my heart with the lengths he went to defend not only his family, but the newest members who have joined the fold. If only there were more men like Seamus in this world! He went to great lengths to protect them, much like a parent would and should be.

It was great seeing the family dynamics in action once again as well, with Dee ruling her broad with her usual barb and iron fist. She's the ultimate Mom. I hope that Nora finds in her that mother she deserves. It's my most reverent wish that in Dee, Nora finds a true mom abandons her attempts with Marie.

I'm SO ready for the next book in this series ... and Quinn's story. Something tells me though that I won't survive this book without Kleenex. 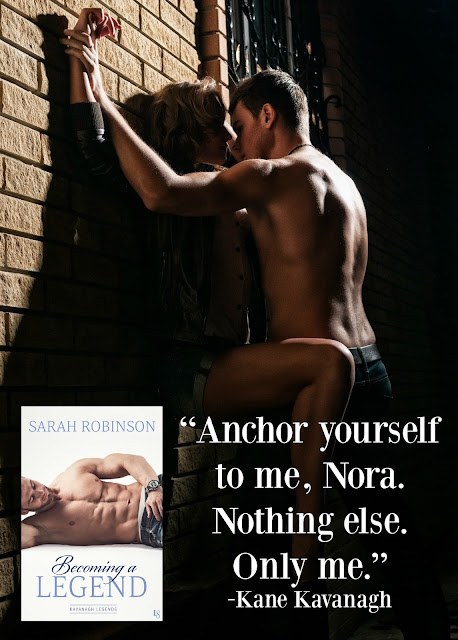 
“I think you broke his nose,” Rory, his oldest brother, told Kane as he handed him a bottle of water in the corner of the Vegas octagon. The crowd buzzed with excitement, voices hoarse from screaming during the last few rounds. It was all Kane could hear, and it made the blood pound through his veins as they cried for more.
Kane glanced across to his opponent in the opposite corner, similarly surrounded by coaches and trainers helping him prepare for the next round. Xavier’s nose was clearly crooked and gushing blood into a towel, but he didn’t seem concerned or in pain. Meaty, but short, Kane’s enemy was built like a tree stump, low to the ground and impossible to budge. Kane had quickly discovered that although Xavier wasn’t fast, or all that powerful, he wasn’t going to be easy to take down.
Not that it really mattered. He was following someone else’s orders now. End it in the third round, not a minute sooner. Make it look believable, break his nose or something.
Everything Kane had trained for since the moment he’d first stepped into an octagon was staring him in the face. The fight of a lifetime, his dream of fame and fortune.
It was all happening right here, right now.
And he was going to lose it all. You can’t win, Kane.
His father’s hand landed on his shoulder. “Ready for round three? He’s trying to tire you out, don’t let him.”
“Got it.” Kane stood and shook out his limbs, before Rory helped push his mouthpiece back into place. All four of his brothers and his father clapped him on the back and shouted words of encouragement over the roar of the rowdy Las Vegas crowd, before climbing out of the cage and continuing to cheer him on from the sidelines.
Xavier’s team cleared out as well, while the crowd eagerly awaited the start of the third round. Kane tuned them out, just focusing on his fists clenched in front of him. In less than three seconds, he’d have to make the biggest choice of his life.
The warning echoed in his mind as he stared at his opponent. You’ll do it, or everyone you love will pay your debt for you.
The words echoed and rolled in his gut, sickening him. He could win this fight; he wanted to win this fight. He’d spent his whole life preparing to win this fight. But now he had to choose between two of the most important things in the world to him—the fight, or his family.
Seconds away, and he had no idea what he was going to do.
Those beady, black eyes entered his mind again and the threat rang loud and clear.
Take a dive… or else.


“I don’t have time to go to a fucking party, Rory,” Kane said with a loud exhale as his fist crunched into the heavy bag his older brother was braced behind.
“Straighten your arm, hit it straight on,” Rory instructed as Kane continued punching the bag. “You’ve got to go. Ma would kill you.”
“You got engaged last spring, bro. Don’t you think when the leaves start changing you gotta stop milking the celebrations?” In fact, it had been at the state championship Kane had been competing in where Rory had popped the question to his then girlfriend, Clare. Everyone had gone all googly-eyed over the whole thing, and while Kane was happy that his brother was happy, he didn’t really care about romance, weddings, or “girly” things like that. Kane’s twin brother, Kieran, had fallen under the same ridiculous spell a few months later, proposing to his girlfriend, Fiona.
Now that the oldest two brothers of the five Kavanagh men were settling down, their mother was putting pressure on the rest to do the same. Her desire for grandbabies was getting out of hand.
Rory leaned into the bag as Kane continued to punch it. “It’s not an engagement party, it’s a joint bridal shower for Clare and Fiona.”
“Aren’t those things just for chicks? I’m not going to some pink-glitter party.”
Rory shrugged. “Apparently men are invited too. They’re being all progressive or some shit— I don’t know. Ma said we gotta all show tonight.”
Kane rolled his eyes. “Fine, but there better be beer.”
“You can’t drink even if there is. You’re in training.”
“I’m getting drunk or I’m not going.” Kane slammed his fist on the bag a little closer to Rory’s head.
“Nationals is three months away, Kane. If you’re going to beat Xavier, then you’ve got to be at the top of your game, and I’m saying that as your trainer. You need to be in the best shape possible.”
Kane straightened and pulled the wraps off his hands before turning to the young woman in a neon-green sports bra walking past them toward the treadmills that Legends Mixed Martial Arts gym had off to one side of the main room. “Excuse me, beautiful. Can I ask you a question?”
She paused and looked at him, fluttering her eyelids and giving him a flirtatious smile. “As long as it ends with you taking my phone number.”
Kane grinned. Women seemed to like the whole MMA thing he had going for him. “My brother here says I’m not in shape. What do you think?”
She raked her eyes up and down his body, a slow smile creeping over her face as she paused at his abs and touched her tongue to her lips. He flexed his eight-pack, and when she caught her breath, he shot her a knowing grin.
“Oh, I think you’re doing just fine,” she said with an exaggerated wink. She picked up the phone sitting on the shelf next to where he was standing and programmed in a number. “But call me, and we can put it to the test.” She set the phone back in place.
“Well then,” Kane said with a laugh, his brows raised as he watched her walk off, a purposeful sway in her hips that said she hoped he was watching. She disappeared around a corner, and Kane turned back to Rory. “See? I’m doing just fine, and I’m having that beer.”
“Next time you hit on a random chick, how about you stop her before she puts her number in my phone,” Rory said, grabbing the phone off the shelf and scrolling through his contact list. “If Clare saw something like that in here, I’d be dead.”
“That’s why I leave my phone in my locker.” Kane shrugged. “I come here to train, and that’s it. Honestly, I could be the poster child of restraint and focus.”
Rory snorted, shaking his head at Kane’s sarcasm. “Yeah, sure you are.”
While Kane avoided any romances or trysts at the gym his family owned, he had to admit that it was hard to refrain. There were some gorgeous women who came here, mainly because it was so well known for sponsoring some of the top mixed martial art athletes of the last decade. Rory’s romance with Clare had mostly flourished inside the walls of this gym, or at least the part Kane had seen when he walked in on them one morning having a naked sleepover in the middle of an octagon. Despite their breaking Kane’s cardinal rule, he had to admit it had turned out pretty well for his brother and he loved Clare like a sister now.
“What did she say her name was?” Rory’s face was scrunched up as he stared at his phone. “I can’t figure out what she added, I’ve got like hundreds of contacts in here.”
“Seriously?” Kane leaned over Rory’s shoulder, looking at the contact list he was scanning through. “You’ve got that many ladies on the hook you can’t tell them apart, player?”
“Fuck you.” A smirk lifted one corner of his mouth as he shoved the phone back in his pocket. “Clare’s the only girl for me. About time you started settling down too, you know.”
Not a chance in hell. Kane laughed and shook his head, saying goodbye to his brother as he walked toward the locker rooms to shower. He wasn’t looking forward to the bridal shower tonight, but if there were some hot women there, he might be able to get through it. 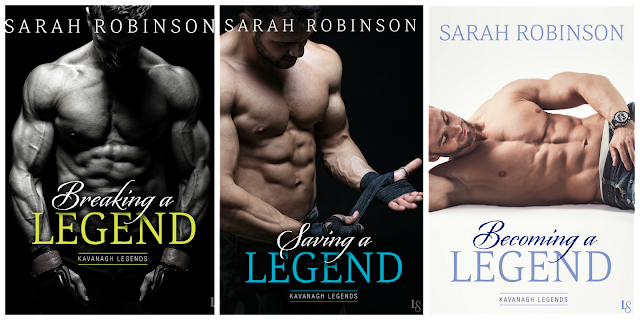