Coming Soon - The Fix Up by Kendall Ryan! 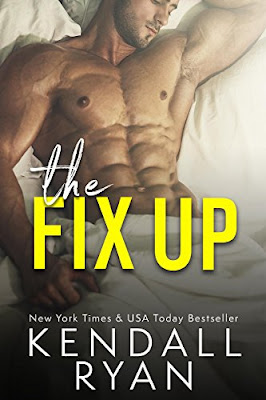 My tempting and very alpha friend Sterling Quinn is someone I consider off-limits.

It's not just that we're friends, he's also cocky, confident, and British, which means he's a walking aphrodisiac.

But lately he's been giving me the look. You know the one. When he thinks I'm not paying attention, and his gaze lingers for too long.

When we start working together, that's when the sexual tension between us gets so thick, I want to hack through it with a machete. I want to make all these deep feelings I've harbored for him disappear, because there's no way this can end well.

The lines between business and pleasure become irrevocably blurred, and I'm stuck between a rock and Sterling's very, very hard place.

Rather than keep a level head about our growing attraction, Sterling wants to go all in, showing me just how explosive we can be together.

But I've been around long enough to know that this British bad boy is more than my heart can handle. I'm not about to be cast aside like yesterday's underwear when he's done having fun.

Sterling’s never been told no, and he's not about to put his ego aside and play by my rules. But I never thought he'd fight so dirty.

The Fix Up is available for pre-order on:

One more week! I'm so excited for

The Fix Up by Kendall Ryan!