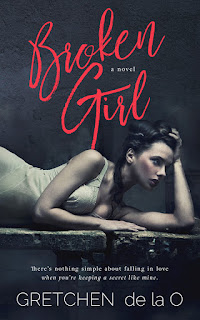 My name is ROSE NEWTON, and I sell my body on the streets of San Francisco. I’m what you call society's dirty little secret. On the outside, I'm in control, the woman who makes her own rules and gives nothing away for free. Inside, I’m broken and numb. Torn and shattered by my past, my life is nothing more than the lost fragments of what's left of me.

SHANE WEST represents everything that’s foreign to me. He’s brave, kind, funny, gorgeous and persistent. When fate brings us face to face, an undeniable attraction blazes between us. He becomes the constant I've never had and the only man I'll ever trust.

There is nothing simple about falling in love when you're keeping a secret like mine.


ADD to your TBR on Goodreads

Broken Girl is available on Amazon

I was really good at acting. I learned early on, a prostitute couldn’t sell her body without the ability to turn on the dramatics. There was something to be said about hooking up every couple of weeks with the same trick and making it seem new. It was my job to make them think what they did to me was the most mind-blowing sex I’d ever experienced and, well, I was pretty damn good at my job.

I had to be stronger than any simple desire to feel worthy of something beyond numb. I knew what was going to happen when I’d truly let him in; things were gonna get complicated, fast. Shuffling my feelings around in my mind for Shane was as fucked up as being beaten simply because I was born. Nothing in this world had convinced me that if I slid that thin blade of emotion against my flesh I’d feel whole again. No love, no desire would ever be worthy of that searing pain.

I pulled my legs up under my ass and curled up on the couch. Tears I hadn’t let go of since I sold my heart to the loveless fuck who took my soul and crushed it, fell fast and swirled from my chin before they soaked into the front of my camisole. I cried. My eyes burned with the sting of every time I thought about all the mindless, sick fucks who stole pieces of my life and never returned them. My controlled aching whimpers turned into uncontrollable belly deep howls as my entire life busted from the vault in my heart.

I didn’t stop crying, not even when my voice was gone and my throat begged me to feel the burn of tequila. And even though I lived through the horrors of alcoholism with my parents, it didn’t keep me from knocking back the entire bottle of that golden poison. I welcomed the warm burn against the back of my throat as the scorching pressure pushed at my lungs and the tequila blazed down into my stomach in waves of gut rotting satisfaction, finally I felt something before I had become ragingly numb. 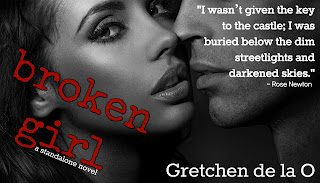 Gretchen de la O, is a writer of romantically unique stories. A proclaimed positive energy infuser by people who know her, she finds joy in helping those around her discover their creative process. Gretchen is a firm believer that anything is possible if you set your mind to it; and what you expect out of life, always finds a way of showing up. She’s authentic in her dedication to her own creative process, finds strength in her spirituality, and is always looking for the bright spot in every situation.

Gretchen released her first novel, Almost Eighteen in September of 2011, the first in a three book new adult student/teacher romance series, The Wilson Mooney Series. In November of 2012, she followed with book two, Eighteen at Last, and concluded the series with Beyond Eighteen in October, 2013. Her fourth novel, PROTOTYPE, a romantic suspense, the first book in the Possession Series was released in October 2014. BROKEN GIRL, Gretchen’s fifth novel, is a standalone contemporary romance slated to be released April 29th, 2016. Please visit Gretchen at www.gretchendelao.com.