4 More Days Until This One Moment by Stina Lindenblatt 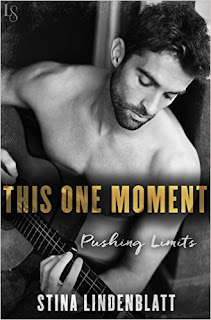 Fame, fortune, and stadiums full of screaming fans are right around the corner for the rock band at the heart of Stina Lindenblatt’s steamy, intense Pushing Limits series. But it’s an epic love affair that steals the show in this opening act.

When Nolan Kincaid skipped town to chase the music career of his dreams, he knew he wouldn’t miss the reminders of his broken family—he wasn’t so sure he could forget the girl he left behind. Now his band is touring nonstop, the recording sessions go all night, and the groupies are crazed. But when he hears that Hailey Wilkins is in trouble, he drops everything.

Hailey thought she’d missed her chance with Nolan. Five years ago, the moment she realized she loved him was the moment he decided to leave. Now, when a brutal assault lands her in the ICU, Nolan flies straight to her bedside, acting like nothing’s changed. What’s a rock star like him doing, canceling shows and risking his record deal, just to nurse an old friend back to health? And why should Hailey believe he’ll stay this time?

With her attacker still at large, Nolan’s ready to rise to the occasion. He knows he let Hailey down once before, but he’s ready to give her everything, heart and soul—and he’ll fight for the chance to prove it.

This One Moment (Pushing Limits #1) by Author Stina Lindenblatt is available at: