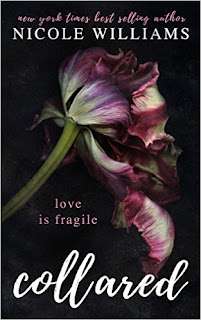 
When a seventeen-year-old girl vanishes,
A community is shaken.
Parents turn desperate.
Friends hold vigils.
And the boy who loves her searches.

When a year goes by,
The community is recovering.
Parents feel hopeless.
Friends feel helpless.
And the boy who loves her continues his search.

When ten years go by,
The community has forgotten.
Parents cling to the past.
Friends move toward the future.
And the boy who loves her . . .

Jade Childs spent ten years in captivity, but now that she’s back, the real battle for survival begins. The media shadows her. Flashbacks haunt her. Her old life evades her. Her so-called new life rejects her. She spent too many years in the dark to recognize the light. She spent too long repressing her feelings to remember how to express them. She spent a decade abandoning hope and cannot dare letting it back into her life. Jade’s not just defined by what happened to her—she’s collared to it.

When the twenty-seven-year-old woman is found,
A community wants to know the story,
Parents want to forget the story,
Friends want to be a part of the story,
And the man who still loves her faces the greatest challenge yet: letting her go.

Collard is available for pre-order at:

Nicole is the New York Times and USA TODAY bestselling author of the CRASH series, the LOST & FOUND series, and a good handful more. She writes romance because she still believes in soul mates and happy endings.

Nicole loves hearing from her readers. You can contact her at nwilliamsbooks@gmail.com.